I am terrible at blogging it seems.

I don’t want to go into my personal life too much on this blog, mostly because it’s pretty mundane stuff, but I’m in a pretty good place in my life right now. 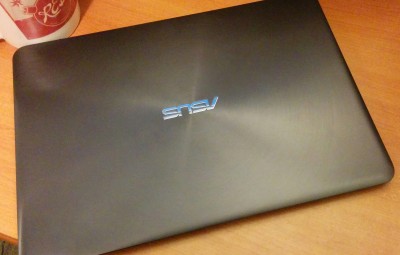 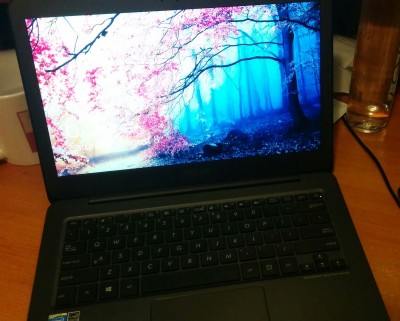 My laptop is pretty cool though! As I mentioned to Tara a while ago, I wanted a laptop to do everyday, non-gaming things away from my desk (i.e. in bed, because it’s currently winter here and so cold). At first my budget was quite small, as I already have a pretty impressive desktop computer that I put together a while back.  I was even looking into Chromebooks because they had such positive reviews, but I discovered that the range available in Australia was quite limited.  If you’re interested in Chromebooks, Tara’s got a review up.

Anyway, work pleasantly surprised me with a bonus so I decided to splurge on the laptop I wanted to get.  It needed to be light, with good battery life and full HD resolution.  I ended up going with the ASUS Ultrabook UX305FAon sale and it ticks all my boxes! It’s 13″, fanless (and therefore silent), the battery life seems pretty good so far and it’s so light! The most interesting feature is that the metallic casing is silvery-black in some lighting but purpley in others.  I named it Calcifer, to continue my trend of naming my signifcant pieces of electronics after Ghibli characters. It’s going to last me a while.

At the end of this year we’ll be going on our 6-week honeymoon to Canada, US and the UK (maybe also Europe).  Calcifer will definitely be coming with me.  What I’m tossing up between now is whether to blog my travels… knowing me I’d probably end up being to lazy to…

Still, I haven’t forgotten this place and I hope to blog more often about random things!

Last year, I was waiting in line at a grocery store checkout with Tim. We had a small basket of groceries and were chatting away until I gradually noticed that a lady directly in front of us, who also had a basket of goods, was taking an unusually long time to be processed.

My attention turned to her and I realised the reason for the delay was because she didn’t have enough money to pay the total amount that was rung up. I saw her talk with the cashier who advised her that her credit card was declined.  The lady told her she’ll pay some of it by card and the rest with cash.  The cashier (who was thankfully helpful and patient) rung up her card again for a lesser amount (which worked) and waited for the lady to dig up the balance in cash.

The lady dug around and around in her bag and found a few notes and coins but it became evident that she didn’t have the total needed. By this time, more and more people had queued up. After some long minutes, she looked at the groceries and decided to forgo one of the items. She was still $5 short. She contemplated her groceries and finally decided to forgo another item, a jar of honey, I think. She was less than a dollar short. Finally, she had to give up another small item before she had enough money to finish the transaction.

The whole time, I was desperately trying to look nonchalant and distracted. I felt so sorry for her that I thought that the worst thing I could do was gawk or seem impatient. So the whole time, I obsessed over seeming like I was preoccupied with something else and not aware of her predicament. I had thought, wow she’s in a really tough and socially embarrassing situation, it would help if others (like me) didn’t seem like we were judging her.

After she left (hurriedly) with her stuff, Tim and I discussed the situation and I came to the realisation that either one of us could have just paid for her groceries. It was so obvious, and I kicked myself for not thinking it at the time. Honestly, it made me feel ashamed.  I felt like a terrible person. I could have easily forked over $6 (gladly!) and that could’ve made the lady’s problem go away, but for some reason, that course of action didn’t occur to me in the moment.  I was so preoccupied with not making her feel judged that I completely neglected to think about just helping her.

And the kicker? It was Christmas Eve. I kid you not. That made it about 10 times worse.

Even now, months later, I still cringe at the memories of that day. No matter how you look at it, I was stupidly oblivious to someone in need and went about considering the problem in entirely the wrong way. I’ve no doubt learnt my lesson, but ugh, how I wish I could go back in time and brighten that stranger’s Christmas just a little bit. 🙁